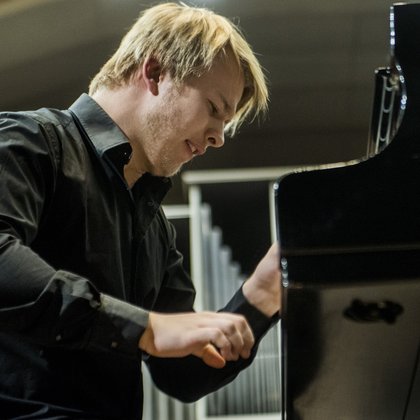 The winner of over 16 international competitions all over Europe, Paulius Andersson was born in 1995 in Vilnius, Lithuania. He has been surrounded by music since the very first day he was born – his family has been renown musicians for generations (his mother Alexandra Zvirblyte and his grandmother Veronika Vitaite are established pianists and professors as well as his grandfather – a distinct conductor – Vytautas Žvirblis).

At the age of 5 Paulius not only started playing piano, he also started performing and throughout these years he performed all over Europe, Japan, Indonesia and USA. At the age 11 he made his first debut with The St.Christopher Chamber Orchestra, conducted by D.Katkus, performing W.A.Mozart‘s concerto for piano and orchestra D-major.

In 2012 Paulius made his debut recital in Washington, USA.

Paulius not only has been performing in the most prestigious concert halls in Lithuania, Germany, Denmark, France, Spain, Poland, Finland, he’s also been  frequently invited to take part in acclaimed International festivals in Lithuania Finland, Denmark, Sweden, Estonia,  Russia, Poland, Belorussia (such as Pažaislis, Bistrampolis Christopher, M.K.Čiurlionis music among others.). In 2005 he was chosen to represent Lithuanian Culture in Japan.

Paulius championed numerous international competitions in France, Estonia, Ukraina, Russia, Poland, Lithuania (including „Konzerteum“ in Athens , „Musica classica“ in Moscow, N.Rubinstein in Paris, Resonances musicales in Paris, M.Judina in Sankt-Peterburg, „Art of XXI century“ in Kiev, „Music without limits“ in Lithuania the main price - Golden Parnas laureate title in the international festival “Bezcady bez granic” Poland. In 10 of them he was awarded with first price or  Grand Prix. In 2018 he became a pricewinner in Neapolitan Masters piano competition ( Neapli, Italy).In 2020 Paulius have won 2nd prize at the International S.Rachmaninov piano competition in Moscow

Piano and drums improvisation is another Paulius’ passion for which he also received prizes.